Beverly's many ways of remembering Sean 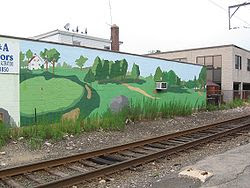 This is a weekend dedicated to remembering. A major part of Beverly’s life after 9/11 involved remembering Sean. Her efforts to support various measures to make the country safer were one way of leaving behind a lasting and positive legacy for Sean. But she also established a number of physical reminders of her husband’s life and loss. In January 2009, just a few weeks before she died, Beverly wrote a detailed description of the various memorials she had created in memory of Sean. On this solemn weekend, here is her account.

The first memorial was the grove of trees at Cove Island Park in Stamford. I started out with ten trees in October 2001. I was certain I would never get any of Sean's remains, so in the absence of having a traditional cemetery plot to visit, I decided a grove of birch trees (Sean's favorite) at a place we frequented would be the best alternative. I nurtured those trees (pruning, mulching, weeding, even watering) for five years. They grew rapidly, filling up the space along each side of the rollerblade path that Sean and I had once skated along hand-in-hand. I had a temporary brass plaque there that said:

To everything there is a season:

A time to plant, a time to reap;

A time to laugh, a time to weep;

I also planted four cherry trees at Daskam Park in Stamford in October of 2001. I wanted something I could see every day (I passed the park on the way to work), and I wanted something that would bloom. I also scraped and painted the three old park benches there because they were very dilapidated. They need painting again, but the Parks Department keeps telling me they are going to put new benches, there but they haven't done so to date.

My neighbors indicated they wanted to plant a tree in memory of Sean, too, and so I selected the green spruce that is also in Daskam Park. That was dedicated in the summer of 2002.

I added ten more trees to the grove at Cove Island Park in August of 2006, but those trees, plus the original ten that I had planted, were all killed when Hurricane Ernesto came up the East Coast and caused a big tidal surge that flooded the park with salt water from Long Island Sound. The trees all turned brown within a few days. I had just added the permanent brass plaque, imbedded on a big stone. The inscription was a variation of the original, I left off Sean's birthdate this time and added "This Grove Was Planted In Memory of...”

The following spring, when it was clear the trees weren't going to sprout, I brought a dolly to the park, rolled the stone with the plaque imbedded on it onto the dolly and wheeled it up a hill over to the edge of the cliff and dropped it over the edge into the ocean. I couldn't think of what else to do with it – the plaque mentioned a grove of trees and I knew that I would never plant another one. Right after that I gave permission to the Parks Department to take down the dead grove. It is now a bare stretch of grass.

Also in 2006, I planted two more cherry trees in Daskam Park and had a permanent brass plaque installed there on a rock as well. It says:

PLANTED BY FAMILY AND FRIENDS

AND ALL WHOSE LIVES WERE LOST ON

The four original cherry trees, and the green spruce, are all doing well and the 2 new trees have survived and are doing OK, although this winter someone has broken 3 lower branches off one of the new cherry trees.

In the summer of 2002, I commissioned a mural at the train station. It's a stylized version of Sterling Farms Golf Course, the public course in Stamford where Sean loved to golf. In the summer of 2006, I painted a rock on the wall and had an imitation brass plaque affixed to it. It says:

Commissioned in Memory of

In 2003 the City of Stamford and the Keep America Beautiful Foundation's Stamford office decided to create a memorial for Sean at the train station. It is a tree, a bench, a short brick path, some low evergreens and a flagpole. This past summer, in 2008, I planted two cherry tree saplings there. There is a rock with a brass plaque on it. I was there today, brushing the ice and snow off the plaque. It says:

There are three trees at the Amherst Memorial Grove in Amherst, NY that are dedicated to Sean, with plaques – one from me, one from my family and one from Sean's family. They were planted during the summer of 2002. My plaque reads something like:

The beauty of nature quiets the soul
And lessens the pain that man's inhumanity
Inflicts upon man.
In Memory of Sean Rooney
2/2/15/51- 9/11/01

The original tree I bought for Sean died and was replaced. All three trees, plus most of the other trees in the park there, were all damaged in an ice storm in October in 2007. My tree now looks more like an umbrella than a Crimson King maple.

Last summer an engraved paving stone was installed along the walkway of the Roycroft Campus' "Appian Way." Sean hand I were married in my sister's backyard, within walking distance of the Roycroft Inn, and we stayed there on our wedding night. Sean had also worked there as the restaurant manager at one time in the 1970s. The plaque doesn't mention September 11th. It says:

VOICES AND LAUGHTER, RISING ON STILL AIR
IN A LIGHT THAT SEEMS TO PARALYZE TIME.

SEAN ROONEY, WE REMEMBER YOU.

There is a small paving brick with Sean's name and date of death on it at Hope Park in Stamford, which is a large traffic circle with trees on it. The Glenbrook Neighborhood Association sponsored the laying of memorial bricks for anyone who wanted one there.