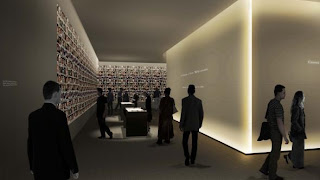 Beverly Eckert and other 9/11 family members fought hard to preserve "down to the bedrock" the place where the Twin Towers of the World Trade Center rose and eventually fell. It was hallowed ground to them, worthy of respect, of preservation, of memorializing. The National September 11 Memorial at the World Trade Center opened, on time, to the public on September 12, 2011. Just last week, officials announced that more than a million persons have visited the memorial. Many gazed upon the rows of names of those who perished while listening to the stream of clear water eternally flowing into the void where the tall towers once stood.

A museum is also being built on the site. It will house exhibits describing the events leading to the attacks of 9/11. The museum will also pay homage to those who responded to the attacks and those who did not survive, telling their stories in a variety of mediums. Visitors also will be able to see parts of the World Trade Center that were left behind, tangible fragments of a massive building complex that was in a day turned to rubble, the smokey and dusty resting place of nearly 3,000 persons.

There were hopes that the museum would open its doors in time for the 11th anniversary of the attacks, but a funding dispute beteen the Port Authority of New York and New Jersey and the National September 11 Memorial and Museum Foundation has thrown that possibility into doubt.
Posted by Anthony Toth... at 2:51 PM No comments: