A Touching Memorial to a Wonderful Life 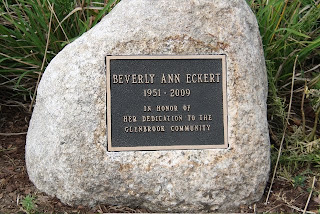 Beverly Eckert touched many lives. And especially in this first holiday season without her, I'm struck by how she was able to bring so much to so many.
First and last, she was an eternally devoted wife to Sean Rooney. To the members of her family, she was loving and joyful and constant. Outside of this close family circle, the luckiest ones were invited into the warmth of her friendship, the generosity of her soul, the kindness of her heart. Those who worked at her side -- feeding the hungry, sheltering the poor, improving her neighborhood, tutoring children, making the country safer -- were impressed by her talent, diligence and determination. If Beverly joined in the effort, things got done. Others only knew of her, that she had lost the love of her life on 9/11, worked through her grief to make the country safer, and then died herself in a plane that plummeted from icy skies near the places in Buffalo where, during the course of her wonderful life, she had played, learned, fallen in love and reunited regularly with her loved ones for such occasions as holidays, weddings, births and deaths.
One person who was touched by Beverly is Anne Goslin, who was one of the principal organizers of a modest and touching event October 31st during which Beverly's memory was celebrated and set into stone. Anne had at first known Beverly only casually as a neighbor in the Glenbrook section of Stamford. But at one meeting of the neighborhood association Beverly spoke about her work for Habitat for Humanity, and encouraged Anne and others to join her on a project in Slidell, Louisiana. During their brief days hammering and sawing and raising the walls and roof of a fine wooden shed, warm bonds were established among the neighbors who were now part of a construction team. "We had such a good time together," Anne recalled recently. Beverly and Anne kept in closer contact thereafter, and on one occasion Anne was touched when Beverly had invited her and her husband for dinner, and she prepared everything from scratch.
After the shock and pain of Beverly's death last February gave way to warm memories of her life, many people whose lives she touched decided there should be some fitting ways to remember her. Employees of the City of Stamford and local businessmen with whom Beverly worked on a number of neighborhood projects came together and created a memorial plaque set into a block of granite. The plaque matched the one Beverly had erected to remember Sean at the Glenbrook train station where he used to depart for his job in the city.
On a cool but pleasant October morning, then, relatives, friends, neighbors and others gathered at the station as part of a city-wide "Make a Difference Day," of cleaning up, recycling, beautifying. They also came to remember a woman who lived a wonderful life and in some way touched them all.
Anne spoke first, recalling those qualities of Beverly's that would be on display if she were taking part in this "Make a Difference Day." She would have been involved in organizing things, Anne said, setting the course, guiding the effort. But Beverly was never one to sit back and let others do the heavy lifting. As Anne had seen firsthand in the hot Louisiana sun, Beverly was more than willing to get her hands dirty. She would have been there, picking up trash, spreading mulch, planting daffodil bulbs. Recalling the way she had met Beverly, and the ease with which Beverly gathered others to herself, Anne said that Beverly would also have made some sort of meaningful personal connection with someone at the event. Finally, after all the work was done, Anne said Beverly would probably suggest a convivial and memorable gathering, perhaps at Monster B's, a lively watering hole hard by the Glenbrook station.
That was Beverly: the organizer, the worker bee, the easy friend, the center of a celebration.
The city's mayor, Dannel P. Malloy recalled Beverly as well, and recounted her legacy of service and selflessness. State Representative Carlo Leone was there. Beverly's family of course helped with the ceremony, as did other members of the neighborhood association. Karen Eckert said the family had set up memorial benches in the town, in places that were special to Beverly. Some 4o lives that Beverly had touched, in large and small ways, gathered, celebrated a life lived well, and dedicated a plaque that now sits like a bookend opposite the station's first memorial plaque. They all sang "On the Street Where You Live," because it was a special song to Beverly and Sean. They planted dozens of daffodil bulbs, which would bloom early in spring and bring color and joy and perhaps touch the lives of those who passed by and saw them in the sun, saw their yellow faces look up to the sky, surrounding the bookend plaques commemorating bookend lives.
Posted by Anthony Toth... at 3:54 AM No comments: