Vivid childhood memories of the street where she lived 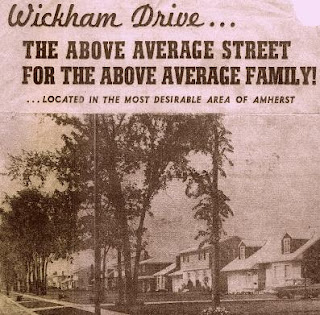 Who was Beverly Eckert, and how did she become that person? These are some of the deeper questions I'll try to answer in No Truer Hearts. My task was made much easier because of all the help Beverly provided during the course of our collaboration. In addition to sending me scores of emails over the years, she gave extensive interviews, and opened up her bulging files of articles, documents and reports. She also provided visual tours of parts of her life, paging through fat photo albums and giving me copies of videotapes with media coverage of her post-9/11 work.

But my favorite source is one I received from her sister Karen after Beverly's death. It is a small book that Beverly had written around 1963 at age twelve titled "Summer on Wickham." In it, Beverly recounts tales of the previous couple of years, when she and a group of her buddies happily roamed the sidewalks, streets and fields around Wickham Drive in Amherst, New York.

This little literary gem is remarkable for a number of reasons. It is quite well written, considering the author's age. Beverly was at times very dramatic in recounting some of her adventures, like this one about a bicycle outing that went awry.


The heat of the day was oppressive, so it was hard going for bicycles. Finally [Beverly and her friends] came to a hill which had a stone wall going all the way down. "Hey Bev!" yelled Cheryl. "If you want to go down faster, keep your feet off the pedals!" "All right," agreed Bev. She pedaled furiously till she reached the part where the hill began. She started down this, her feet off the pedals. The stony wall had jagged edges of rock protruding from it on either side. Bev, as she was going down, looked over this wall. Her heart stopped beating. A car was coming down the driveway that was at the end of the stone wall!

The stories in "Summer on Wickham" provide nuggets of gold for the biographer, for they reveal aspects of young Bev's character: her leadership qualities, her zest for life, an eagerness to make friends, her amazing creativity, and a budding sense of romance. The book is a wonderful gift that she left behind, of cherished memories, frolicsome vignettes of youth, and a window onto her young but precocious personality. Every time I read it, I smile at the memory of Beverly, and remember as well similar episodes in my own youth, and the things Beverly and I had in common, Baby Boomers growing up in America's new and expanding suburbs. And on this day after her birthday, I hope these words bring others closer to her memory and to her bright and vibrant soul.

A proper home for the Koenig sphere


As the years have passed, most of the struggles over how 9/11 should be remembered at Ground Zero have been resolved. But now the final resting place of a very special work of art is in question, again.

In the months and years after 9/11, there were many battles. Back when the twisted steel girders and mountains of ash and remains of those who perished were being taken from the site, family members were pushing hard to make their voices heard. When developers and city officials tried to erase most of what was left after the towers fell and thousands died, Beverly Eckert and other family members said no. Their voices were united in the Coalition of 9/11 Family Members, a group that focused on making sure Ground Zero would not be bulldozed, buried, developed and forgotten, with only a token space devoted to a memorial.

Beverly and other family members had to fight hard, but often they won. Thanks to their efforts, major features left behind after the destruction of the Twin Towers was cleared away were incorporated into the design of the 9/11 Memorial and Museum. The issues the coalition fought for are listed in this 2005 petition.

But once again people are talking about the sphere, a massive metal sculpture designed by Fritz Koenig which was damaged by the pieces of the falling Twin Towers and was displayed for years in Lower Manhattan's Battery Park. The sculpture, which is titled "Sphere for Plaza Fountain," after it's original location, must soon be moved to make way for a long-scheduled renovation of the park. But moved where?

It seems that the owners of the the artwork, the Port Authority of New York and New Jersey, have not figured out where to place it. Beverly and other coalition members felt strongly that the sphere belonged at Ground Zero, as an integral part of the memorial complex. Thousands of others feel the same way, and have signed a petition to that effect.

There are many good reasons for 9/11 Memorial officials to incorporate this unique and deeply evocative survivor of that horrible day. The artist himself said it was meant to be a symbol of peace through world trade. For countless people who worked in the Twin Towers or visited them, the sphere tells a moving story, bridging the happy, busy days before and the tear-stained days after. It captures the memories of those times before the horrible day, of sunny lunches shared with friends by the plaza fountain, of school trips to the big city, of business deals, of work, play, wonder and love in the shadow of those magnificent buildings. But now the sphere shows scars, dents and scrapes from that day.

May it gleam once again in its proper place under many, many sunny days.
Posted by Anthony Toth... at 4:52 PM No comments: