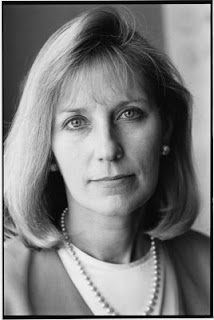 Beverly Ann Eckert was born this day 58 years ago, and it became apparent as she ran, hopped and skipped through her youth that she was an exceptional girl who loved to play. She grew up in Eggertsville, NY, a few miles from Buffalo. She attended St. Benedict's School from kindergarten to grade 8. Beverly had a brother, Raymond, and three sisters: Susan, Karen and Margaret (Margot). And they played, oh, how they played. But Beverly was not just one of the pack. She stood out, even then. Beverly could "could out-bike, out-dodgeball, and out-hide-and-seek the neighborhood gang," as Margot wrote in her poem, "Strong Women." The young Beverly was active, creative and gregarious -- jumping rope, building forts, dressing up like a cowgirl and getting swept up in the Mickey Mouse Club fad as a Mouseketeer.

Beverly Ann Eckert attended Sacred Heart Academy, and teachers and friends saw she had an artist's eye, a writer's ear, and the passionate heart of a true romantic. She was fascinated by the idea of love. During her high school years, Beverly's creativity and social life blossomed. At SHA, an all-girl Catholic school, Bev wrote poetry, drew pictures, participated in drama, played basketball and took a turn at student politics. Her friends and teachers noticed she had a certain flair, a talent, a drive. What Beverly wanted to accomplish, she did. And like so many young people rushing toward adulthood, Bev wanted to fall in love. One of her best friends, Kathleen DeLaney, described how Bev eagerly counted down the days to her fifteenth birthday, and on May 31, 1966 joyously announced "I can date!"

Then she went to the dance that changed her life. In the fall of 1967, Bev met Sean Rooney in a crowded Buffalo high school gym. Sean was a thin young man with thick, curly, dark hair and a bright smile that warmed those around him. Soon they began to date, but it was not a fairy-tale romance the whole time. There were rough patches, as on any road, more like the parental troubles of Romeo and Juliet than the glass slipper of Cinderella. When Bev's parents said she could not see Sean, she did not listen. And upon her 18th birthday, in 1969, Beverly left home, went to work and went through some hard times so she could follow her heart. "It was a real struggle to make ends meet," she had said. "Okay, so the right to date whomever you want isn't exactly in the Constitution," she added, "but ever since that time I haven't been afraid of adversity or the consequences... of standing up for what I believe in."

Beverly started her studies as an art major in 1969 at SUNY College at Buffalo (now known as Buffalo State). She and Sean moved in together two years later, and as their love and commitment grew they bought a two-family house together in 1973. In 1976, after seven years of full-time work and part-time studies Bev got her Bachelor of Liberal Arts degree. In addition to her coursework, she had put in long hours at AM&A's Department Store, Mother's Bakery Restaurant, and the Sign of the Steer Restaurant and Bar, where Sean also worked. For a couple years after graduation Beverly worked as a potter, selling her wares as she could. Then began her career in the world of insurance with a job at Travelers Insurance, first in Buffalo in 1978, and then at branches in Massachusetts.

On June 14, 1980, in a simple ceremony in the back yard of her sister's home in East Aurora, NY, Beverly Ann Eckert married Sean P. Rooney. The high school sweethearts had become college loves and then wife and husband. They were so close in life and in the minds of their relatives and friends that they became SeanandBev, one word, one love, one life. Oh, such a love. They never had children because all they wanted in the world was each other. They were partners. He cooked, she cleaned, they both worked on the houses they lived in. And at the end of a hard day, Sean would walk through the door and say to Bev, "Where's my hug." And Bev would remember: "Sean was a good hugger." Food was always important, and in the kitchen Sean was in charge while Bev offered a hand and a glass of wine, whichever was needed. After a good meal, they would sit together and talk quietly and be thankful for the life they had made for themselves.

In her working life Beverly was strong and determined, pushing firmly against a culture of ingrained sexism. She said that women were not permitted in the corporate dining room of Travellers when she first arrived at the company. "What I experienced throughout my insurance career was life as a minority, an outsider, often the only female at a meeting or in the room." Despite this, Beverly rose through the ranks, becoming a vice president and manager at General Reinsurance. "I can say I had a successful career," she said, "but it was seldom comfortable. I had to respect myself in an environment that seemed to want me to feel otherwise, just like when I was poor."

For their 50th birthdays in the year 2001, they did something special. Beverly and Sean gave each other the gift of travel. She chose Morocco for her birthday, and he chose Vermont for his. But no matter where they were, it was in each others' company that they were the most fully contented. Beverly said once to me how happy they had become with their lives that last summer they spent together in their Stamford, CT home. Beverly said she was sitting with Sean at the back door one evening, drinking wine and watching the fireflies come out. And Sean said that if he'd died right then, it wouldn't be so bad, because he'd lived such a good and full life. 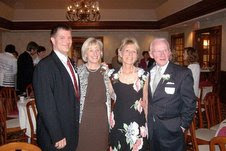 This was supposed to be a very special year in Beverly Eckert's long relationship with her high school alma mater, Buffalo's Sacred Heart Academy. She had been busy helping to organize her Class of 1969's fortieth reunion, planned for June. And on top of that, in the winter of 2008, she learned that she was selected to receive Sacred Heart's highest alumna honor at a fundraising dinner in May. The announcement appeared in the winter issue of the school's alumni magazine, the Cordecho.
But in her typically low-key and selfless manner, Beverly did not crow about the award. Instead, she talked with friends at Christmastime about paying for several tables at the dinner so she could have friends and family surrounding her, and at the same time offer support to SHA financially. Her friend, Kathleen DeLaney, said Beverly "just thought going to the fundraiser would be the thing to do," and that she "really wanted to have all of us there for a great time." It was only later, while they were discussing reunion plans one evening, that Beverly mentioned the award to Kathleen in passing.
But the fiery crash of Flight 3407 on a cold February night changed everything.
Beverly did indeed come back to Sacred Heart in 2009, but not to receive an award or to gladly greet reunion attendees. Instead, she was carried back to a reception at her old school after a memorial service in the hearts of her friends and family and classmates after the memorial service. She came back to those long hallways in yearbook photos and in the deeply felt words of her poems. She hovered over an alma mater washed in grief at her loss and basking in gratitude for her kind, ebullient and generous life.
Kathleen DeLaney brought Beverly back, too, in a wonderful reminiscence in the spring 2009 Cordecho, published on the occasion of Beverly's award. In the article we are treated to the vivid vision of a teenage Beverly, always one of the "early-birds" at school, "sailing through the side door of SHA," her arms flailing and then skidding to a stop near the top of the stairs as she yells to Kathleen: "DeLaney. Hey, Delaney! I'm fifteen today. I can date!" And there is bighearted Beverly, being "an equaly opportunity friend" in a girls' school where exclusive cliques were often the rule. Or Beverly's early plunge into politics, pushing classmate Gay Gambin to run for class president, and then running her campaign, complete with "strategically located tape recorders around the school playing, Vote for Gay, Vote for Gay on a constant, subliminal loop."
And so of course Beverly was there, at the Transit Valley Country Club on May 14, at the "Spirit of Sacred Heart Academy" Awards Dinner. Her friends and relatives had gathered once again, to share memories and honor her many achievments. Kathleen remembered Beverly as she examined her "giant glass of Pinot Noir" for "tell-tale dishwashing spots...something Beverly always did... (always the waitress!)"
When Beverly's sisters, Karen Eckert and Susan Bourque, went to the lectern to receive the award on Beverly's behalf, there was a standing ovation. Beverly's brother Ray was there as well, and their cousin Clem Eckert also received an award. Speaking to a reporter, Karen recalled how Beverly wanted to make sure that her departed classmate were remembered during the planned reunion of the Class of '69 with a white rose. At the June event, there will be a white rose for Beverly, too. Susan said "We're carrying on her legacy. It was all about making a difference. We hope we can fill her shoes. We hope everyone takes from her those lessons that an ordinary person can really make a difference."
A short video clip from WIVB appears here.
Posted by Anthony Toth... at 10:28 AM No comments:

A musical remembrance for Beverly on her birthday

This is the first May 29th when Beverly's many relatives and friends cannot wish her a happy birthday in person. Birthdays were special for Beverly. They offered her a chance be with loved ones, to raise a glass, to eat something sweet, and unleash her creative energies. She loved to plan, to surprise, to make gatherings unique and memorable. She reveled in being in the center of preparations, the source of inspiring party themes, songs, poems.
Before 9/11, these parties were purely joyous. After she lost Sean, Beverly held celebrations of his and her birthdays that were overcast with the pall of loss but brightened with the memories of better days. But as the years passed, she was beginning to smile more.
And now her friends and family carry on her tradition of celebrating life and love and the company of those dear to us.
Beverly's dear friend, Nada Radulovich, who played her cello so movingly at the memorial service in Stamford, will perform at a recital May 29 in Beverly's honor. She will be joined by pianist Cullan Bryant in a program featuring works by De Falla, Beethoven, Liszt and Chopin. It will be held at 2 p.m. at the Yonkers Public Library, Grinton I. Will Branch, 1500 Central Park Ave., Yonkers 10710. Admission is free.

Flight 3407: A new tragedy breeds a new set of loved ones seeking answers and solutions

Two of Beverly Eckert's sisters are among the loved ones of victims of the Flight 3407 crash who are in Washington, DC, to attend hearings and to lobby legislators. According to an article in the Buffalo News, Karen Eckert and Susan Bourque are attending hearings of the National Transportation and Safety Board during which witnesses will be presenting testimony aimed at discovering the cause of the crash. And Beverly's sisters will walk some of the same hard marble hallways on Captitol Hill that she so often trod during her 9/11 reform efforts. In both cases, the loved ones are trying to make sure a tragedy is not repeated.
Posted by Anthony Toth... at 10:59 AM No comments: