February 12, 2009: Remembering another routine day that turned into a nightmare 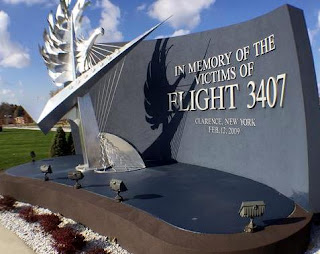 February 12, 2009 was Beverly Eckert’s last day on this beautiful, sorrowful earth. I'll be putting forth a fuller account of the day in No Truer Hearts. What follows is a shorter version. It's a small reminder of her generosity of spirit, her kindness, and her desire to do good in the world to the very end.


About 5:30 a.m.
Beverly Eckert rises and begins her day.


6:41 a.m.
Beverly sends an email to her sister, Karen Eckert, with the subject line “yes, please make the sauce”. In Buffalo three days later, Beverly and family members plan on celebrating Sean Rooney’s birthday with a dinner of homemade ravioli, one of the many dishes he used to make at such gatherings before his death on September 11, 2001.


7:45 a.m.
“pillow, bathrobe, hair products, humidifier” -- another email subject line. “Can you get these things out for me?” Beverly writes. “I’ll swing by your house around 9 before I go to my hotel.” Usually Beverly stays at Karen’s house when she’s visiting, and keeps a cache of necessities there so she doesn’t have to pack them. But on this occasion she decides to book a room at the Lord Amherst Hotel because one of Karen’s sons is home, and Beverly does not want to be a bother, even though Karen has told her it would not be.


Mid-morning
Beverly walks to the the Julia Stark Elementary School to work with students who need help with reading and math. She’s been volunteering here two days a week, and has made warm connections with her students. When she’s done, she goes home with a manila envelope containing Valentine’s cards from the students. She places the envelope on her kitchen counter and finishes her preparations for the trip to Buffalo.


Afternoon
Beverly drives to Newark Liberty International Airport, a distance of about 60 miles, but along New York City metropolitan area roads notoriously congested. She hits traffic backups that make her worry she won’t make her flight. But she arrives in time to check in for Continental Connection Flight 3407 to Buffalo, which at the time is showing an on-time departure at 7:10 p.m.


Evening
“Newark! What are you doing in Newark?” Karen is taken aback when Beverly calls to say where her flight is departing from. On all the other flights she’s taken to Buffalo, Beverly’s flown jetBlue out of JFK. This time was different. She had gotten a free flight voucher for Continental that was about to expire, so she decided to use it.


As the time for departure approaches, Beverly tells Karen that it doesn’t look like the plane will leave on time. Karen talks about how the weather has been in Buffalo during the day, with “pebbly ice,” a consistency she had never seen before. “Oh no, not ice!” says Beverly. But Karen is quick to offer reassurance. “It’s not gonna be a problem because it’s pretty warm. It’s like 36 degrees,” she says. With temperatures hovering just above freezing, there was a little bit of everything that day -- snow, hail, rain and fog. The wintry mix would continue into the night.


7:45 p.m.
Continental Connection Flight 3407 finally pushes back from the gate, 35 minutes behind schedule. Bad weather in the region had cause many flight cancellations earlier, and now the taxiways were crowded with extra planes arriving and trying to depart. For the time being, Beverly and the other passengers sit and wait on a plane that is not moving.


8:24 p.m.
The captain finally makes an announcement: “Folks, from the flight deck, just to keep you updated… we’re gonna be sitting here just for a few more minutes. We did have some taxi delays out there obviously because of the weather. Planes are moving… Right now we’re about number twenty for takeoff.” He adds that it will take 40 to 45 minutes before the plane is airborne.

8:26 p.m.
The passengers are told they can use their phones, so Beverly calls Karen. “We’re on the runway,” she tells her. “They’re telling us the plane’s gonna take off about 9:10. That means by the time I get to your house it’s gonna be late. Just put my stuff on the porch -- all my stuff. You can go to bed.”


“Nooo! I’m not gonna go to bed. I’ll be here,” says Karen, adding that if the flight happens to arrive even later she’ll leave the porch light on to show she’s still up. In the meantime, Karen has packed the items Beverly requested in a black plastic bag and put it on the front porch.


8:41 p.m.
In the plane’s cockpit, the first officer is telling the captain she’s not feeling well. She had flown from her home in near Seattle to make this flight and now she had the symptoms of bad cold. “Well, this is one of those times that if I felt like this when I was at home there’s no way I would have come all the way out here...” she said.


8:52 p.m.
The captain makes an announcement: “Folks, from the flight deck: just to, uh, give you another update. We’re getting a little bit closer. We’re still about number ten for departure, and we’ll be airborne just, uh, shortly, and just to kind of, uh, pass on a little bit more information from, uh, the other pilots who have taken off earlier, uh, The turbulence has, uh, decreased, uh, quite a bit, but ,uh, there’s still gonna be some bumps on the climbout, so make sure those seatbelts are fastened tightly. Thanks.”


10:08 p.m.
The first officers gets on the PA system: “It looks like at this time we’re ten maybe fifteen minutes outside of Buffalo. Weather in, uh, Buffalo is pretty foggy. Uh, snowing a little bit there. It’s not too terribly cold but, uh, at this time I’d like to make sure everybody remains in their seats so the flight attendants can prepare the cabin for arrival. Thank you.”


10:10 p.m.
The first officer is talking to the captain. “Is that ice on our windshield?” she says.
“Got it on my side. You don’t have yours?” he replies.
“Oh yeah... Oh, it’s lots of ice. [sniffles]”
“Oh yeah, that’s the most I’ve seen -- most ice I’ve seen on the leading edges in a long time. In a while, anyway, I should say.”
After a bit of conversation, the first officers continues, “I’ve never seen icing conditions. I’ve never de-iced. I’ve never seen any -- I’ve never experienced any of that. I don’t want to have to experience that and make those kinds of calls. You know, I’d’ve freaked out. I’d’ve, like, seen this much ice and thought: Oh my gosh, we were going to crash!”


10:16:53
Flight 3407 crashes on a house at 6038 Long Street in the small town of Clarence Center and bursts into flames. Beverly Eckert and the other 48 persons on board perish in the fiery aftermath, as well as a man who lived in the house.
*    *    *
An investigation by the National Transportation Safety Board determined that pilot error had caused the crash. Family members of those who died in the crash, including Karen Eckert and Susan Bourque, another of Beverly’s sisters, lobbied Congress and the Federal Aviation Administration to introduce measures to prevent future tragedies such as this. Thanks to the tireless efforts of these citizen activists, the FAA introduced new rules in 2013 aimed at improving the training of pilots in dealing with stalls and other safety factors in order to improve their preparedness in future flights.
Posted by Anthony Toth... at 1:21 AM No comments: