A Year after the Crash of Flight 3407: A Walk to Remember, A Walk to Promote Airline Safety 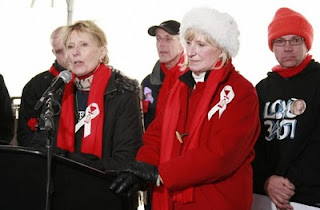 On February 12, 2009, Continental Flight 3407 fell from the sky onto a house in Clarence Center, NY, extinguishing 51 lives. One year later, those touched by the tragedy began a day of remembrance at the snow-covered crash site on Long Street, now a peaceful plot of land. They gathered to recall their loved ones with fondness and joy, and walked the ten miles from Clarence Center to Buffalo Niagara International Airport, completing the journey on behalf of those who perished that awful, snowy night. But in addition to keeping bright the memories of those lost lives, the walkers and many onlookers in neighborhoods along the way were also expressing support for the aviation safety reforms that had yet to be implemented by the FAA and Congress, reforms meant to prevent such calamities as that which befell the victims of Flight 3407.

Beverly's sister Margot had decided to undertake this journey in a pair of warm, black boots. They were not quite her size, but because they had belonged to Beverly, she felt it would be meaningful to walk them along this special route.

No one knew quite what to expect along the way. The organizers had initially envisioned a simple affair with just a few family members walking the symbolic path to Flight 3407's destination. But once others heard about the project, it snowballed, so to speak. Not just family members and friends, but members of the community, business leaders and others wanted to participate. And so a simple commemoration grew to be a community-wide call for aviation safety.

Hundreds of people participated in one way or another. There were those who walked, those who helped, and there were many hundreds along the route who waved, held up signs, or otherwise showed their support. About the halfway mark, a group of school children stood in a line along the route and offered their upraised hands to high-five the walkers. "They really invigorated everyone, " said Karen afterward. "The heartwarming thing was that you saw so much support from the community," she added, noting that the Public Broadcasting Service's Frontline series had just aired an excellent program called "Flying Cheap." The hour-long program examined the issue of regional airline safety lapses, with particular attention to the case of Flight 3407. Karen, Susan and other Flight 3407 family members had appeared on the program. It's no surprise that the program was closely followed by the Buffalo-area viewing audience, and that their awareness of the need for airline safety reform was high, said Karen.

There was great relief at the end of the walk. For some, it was taxing both physically and emotionally. "I walked to the point of exhaustion that day too," said Margo Eckert, "the ache in my legs matching the ache in my heart. How can it be that I miss her more now?"

At a press conference at the airport, there were words of gratitude, love and encouragement from family members and political officials. Sen. Charles Schumer had worked with the family members through the year on their safety reform efforts, and had glowing words, greeted by enthusiastic applause. “I am honored and humbled to be in the presence of these families and I pledge in every way to see that their goal – to make sure this never happens again by passing sensible laws and applying the same laws that we apply to the big, commercial airliners, to the commuter airlines – becomes the law of this land” Schumer said.

At 8:30 p.m. there was a ceremony at the Clarence Town Hall where the first responders presented a slide show of their efforts that terrible night, and where family members could offer their words of thanks. The final event of the long day brought those touched by the tragedy back to the plot on Long Street where so many loved ones perished. In the darkness and cold and lightly sprinkling snow they came bearing candles, lit luminarias bearing the names of the victims arranged on the cold, hallowed ground in the shape of a large, looped ribbon as Karen recited the names of the departed, slowly, solemnly. At the moment of the crash, at 10:17 p.m., church bells from near and far began to peal 51 times, but their song was interrupted by the loud roar of a plane flying directly above the crash site.

Margot Eckert said it was the last plane she heard that evening in the flight path. "Snow was falling," she added, "those big flakes, like tears."

Karen later said that in the days leading up to the anniversary, and on the day of the walk itself, she could hear Beverly's voice in her head, saying, "Do the right thing... Make sure this won’t happen again.. I’m gone; you can’t bring me back, but you can do something... It’s important, and the anniversary is an important time to call attention to the fact that things still have to be done..."

So often in life we don't listen hard enough to the voices of the ones we love. But if their message is strong and true, their words will survive even death.

Such joy, such life 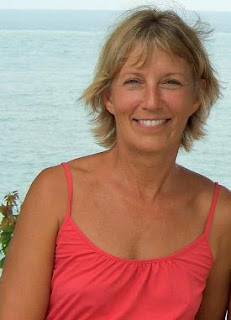 I think of Beverly every day.

One year ago, her life ended, but her story was carried on by those whose lives she touched. The story of the jump-roping, hop-scotching sister; the high school poet/artist/basketball player; the strong-handed potter; the assured insurance executive; the partner-for-life of her beloved Sean; generous and exuberant friend and neighbor. And in the final chapter of her life: volunteer and citizen-activist extraordinaire.

And so we will remember Beverly in our own ways. When she remembered Sean, it was with gratitude for their life together, and with a sense of the joy he brought to her life and the lives of others. Today I want to remember Beverly with that same sense of joy. It’s not a difficult thing to do. Looking at the smile on her face puts a smile on mine. The gusto with which she lived her life inspires me to skip, dance and immerse myself in the wonder of something so simple as a setting sun.

Think of Beverly and the snow! A born and bred Buffalo gal, she loved the snow, and missed it when she wintered away from the cold Northeast during her Caribbean cruises. And when she was home, she would immerse herself joyfully in the season. In December 2008 she wrote: “Holidays are a wonderful escape – recapturing the magic of childhood can be intoxicating, and who can resist snow, family gatherings and Christmas trees?” One wonderful wintery image in particular is etched in my memory: Beverly, head tilted back in a full-throated laugh, riding down the small hill in her backyard last January in the most unlikely of conveyances – the hull of a Sunfish sailboat! Just like a kid. “Instead of just storing it,” she wrote, “here’s something I discovered that you can do with a sailboat in wintertime. This is cutting-edge stuff – I just know it’s going to catch on!”

Think of Beverly on the water! One of her favorite ways to relax (“I love the serenity”) was to spend time in her kayak. And like everything else she did, Beverly jumped in with both feet. In the summer of 2004, she wrote: “Kayaking yesterday turned out to be more exciting than I anticipated. One of my friends capsized, dumping herself and a full load of supplies into Long Island Sound. Luckily, we were still close to shore, but that meant we had a large audience of beachgoers, not to mention the eager services of the local lifeguard. Anyway, it was hard to get the kayak out of the water and drained because we couldn't stop laughing.” And other simple joys were never far from the surface of the water. In the autumn of 2008 she wrote: “While kayaking Sunday, I caught a turtle with my bare hands. A tiny turtle, but nonetheless untamed by man until I came along.”

Such joy, such life. Such a joyous life.